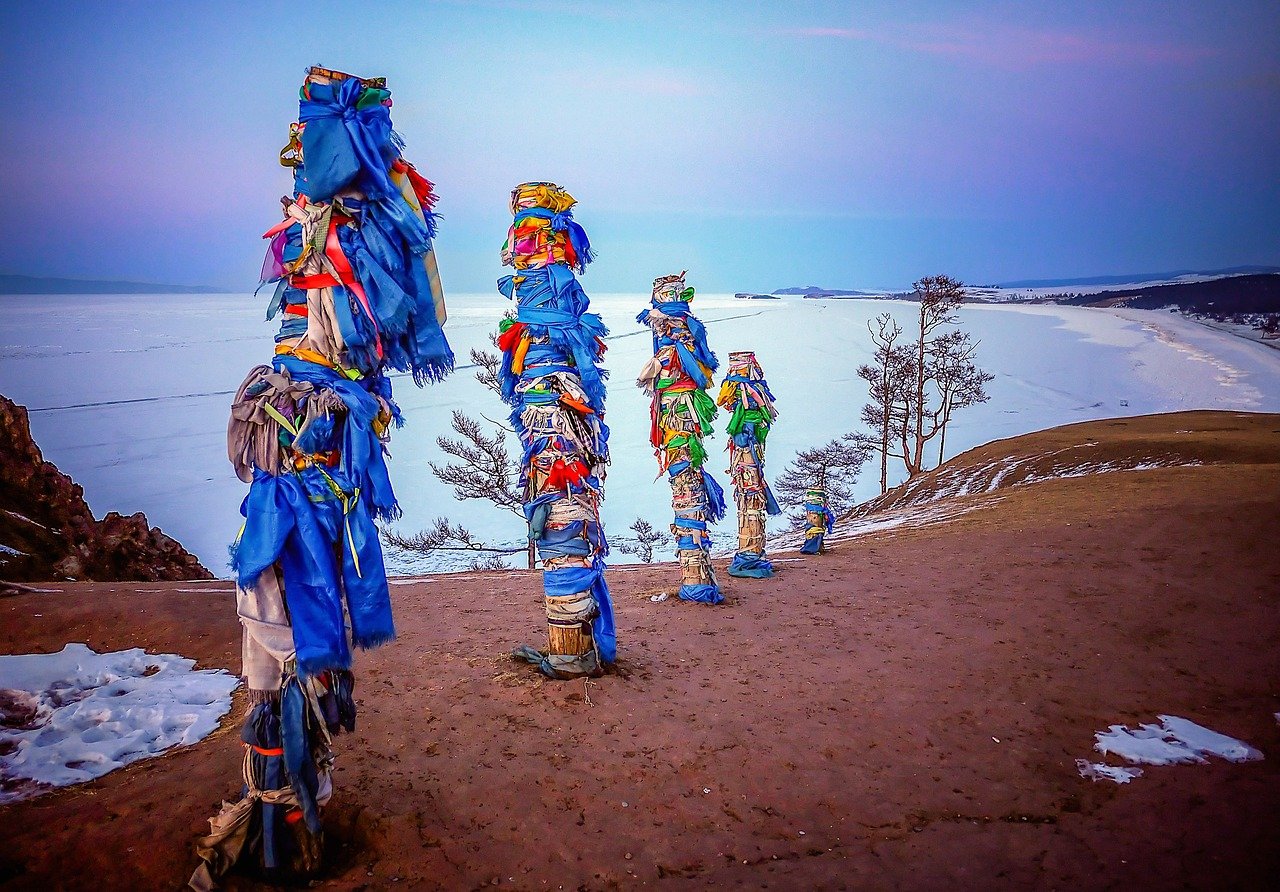 Buryat people and the earthquake

The most popular is the legend of the Buryat people. According to it, Lake Baikal appeared in ancient times as a result of an earthquake.  Legend says, the earth opened up and fire spewed from its depths, burning everything in its way. All people could do was run out of its way and pray to the gods. But the gods were deaf to their cry for help. Hopeless and tired, the people continue to repeat only two words: Bye-gal, which translated from Russian means “stop the fire”.

Eventually the fire really stopped and disappeared as if it had never existed. On the place of the earthquake a deep hole appeared and it began to quickly fill up with transparent icy water.

The body of water that unexpectedly was formed there was called Baikal.

Baikal, his daughter Angara and a sad love story

The second legend talking about the origin of the lake is more romantic. Once upon a time there was an old man called Baikal. He was a famous warrior, an authoritative, rich old man who had a hundreds of sons but only one beautiful daughter, Angara. The old man was hiding her from everyone, not allowing her to meet anyone. But, once the seagulls sang her about a cheerful, handsome gentleman whose name was Yenisei. Since then, Angara could only think of him. Baikal found out about that, and locked her behind seven doors under seventy-seven locks, deciding to marry her to Irkut, a man from a neighboring village. But right before the wedding, Angara disappeared, and he never saw her again. Heartbroken, he cried until his death. The tears that poured out of his eyes turned into a great lake that was called Lake Baikal.

Lake Baikal Monster or the The Flaming Dragon

According to the third legend, the creator of Lake Baikal was the Flaming Dragon. He appeared at sunset, glittering with fiery scales, seated in a chariot of pure gold. Sinking to the ground, the Dragon waved his fiery tail and the earth split from the impact. He waved again and the ice on the tops of the mountains melted, falling down in powerful streams and filling the gap to the brim. Near the lake that appeared, everything was instantly covered with greenery, birds fluttered over the clear water, animals ran merrily. Having looked at the created miracle, the Dragon entered the lake and sank to its bottom. But every 120 years he came to the surface and people organized great festivities in his honor. But once people forgot that the Dragon must appear. Then the Fiery Dragon became angry and flooded the entire earth from edge to edge with water. Later, other tribes, other peoples appeared, but no one else heard of the Dragon.

In addition to ancient legends, there are some quite modern ones. Baikal is considered a special energy center. To recharge and get to know the life-giving energy, ufologists, esotericists and shamans from all over the world come here. Ordinary people are skeptical about such subtle matters, but even they can witness an amazing phenomenon here.

It is said that the silhouettes of some riders can sometimes be seen in the fog. The ghostly figures rush directly at people standing in the water and no one can explain this. The locals believe that this is the host of the old ruler Hassan Joseon, who went under water. His army crossed the lake during the winter, but the ice magically cracked and the black waters swallowed the enemy. Since then, the souls of the warriors have rushed to the shores of Lake Baikal and cannot find peace for themselves.

Another modern legend about unusual appearances around Lake Baikal is related to the existence of aliens. According to this belief, the lake would be a real UFO hot spot. As a result, in the summer of 2012, several locals organized a UFO observation mission on the shores of Baikal in the hope of proving the presence of extraterrestrial activity in the area.